Client Portal
Get An Appointment
You are here: Home > The pension is not a plan

The pension is not a plan 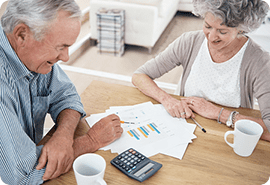 In December 2017, the Organisation for Economic Co-Operation and Development (‘OECD’) released its biannual report into social security systems. The report, titled ‘Pensions at a Glance’ contains some worrying findings for us here in Australia.

Things also get worse with age. The rate of people aged 76 or older living below the poverty line is almost 30%. This tells us that one of the major reasons for older people living in poverty is reliance on the aged pension. Clearly, people who retire with relatively low personal savings tend to spend those savings within the first 10 years of retirement. After that, the pension is as good as it gets.

This is no surprise. The Australian Superannuation Funds Association recently reported that the average superannuation balance for a 65-year-old man is $270,000. A woman of the same age has an average of only $157,000. Remember, these are averages, and dragged upwards by those relatively few people with large balances. Well over half of men aged 65 have less than $270,000 in superannuation. The same goes for women: less than half have at least $157,000 saved their own retirement.

Looking at these balances, it is not hard to see how they can be gobbled up quite quickly in the relatively active early years of retirement.

In some ways, the OECD releasing the report at the end of 2017 might make for a bleak 2018. The good news is that poverty in retirement is often avoidable. Poverty, or even financial distress that does not meet the definition of poverty but is still not much fun, tends to have two things in common. Firstly, older people living below the poverty line tend not to own their own home. Secondly, of the people living below the poverty line tend to have relatively little in personal retirement savings.

That’s why we make these two things front and centre in any wealth creation plan that we prepare for our clients. It is simply imperative that every person aim to own their own home. Hopefully, they will do so well before retirement. But if not, then making homeownership the first retirement goal is a must.

We then focus on helping people save more for their own retirement. Ordinarily, this means optimising superannuation, a tax-advantaged, asset-protected means of saving for one’s future. Here, the old saying really is true: the earlier you start saving, the easier it is to have a substantial amount available when you eventually retire.

That’s not to say that it is ever too late to start. But the earlier you start, the easier everything becomes. The best time to plant a tree was always ten years ago. The next best time is now. So, whatever your age, it is never to late to start saving.

Reading reports like Pensions at a Glance 2017 reminds us of the importance of our work. Helping people live a life of financial freedom is a wonderful vocation. It really is our privilege as well as our pleasure to be trusted by all of our clients to help them live long, happy lives. So, if you want to become one of the good statistics, contact us today. It will be our pleasure to help.